Within the Artist-in-Residence Program, CCA is delighted to host Michael Salistorfer, who is staying in Studio XX during May 2019.

He was born i 1979 in Vils, and today he lives and works in Berlin.

Michael Sailstorfer has a MA Fine Arts from Goldsmiths College, London, and he also studied at the Akademie der Bildenden Künste, München.

He primarily works with sculptures and installations, as well as painting, performance, photography and film. His conceptual-adjacent aesthetics revolves around a notion of sculptural expansion, which refers to the ability of his art to transcend its own format by deploying into the surrounding space.

Ranging in scale from nearly imperceptible interventions to highly elaborate productions, his minimalistic and often absurd visions poetically disrupt the everyday. Whether car tires, wrecking balls, popcorn machines or simple trees, familiar objects are systematically diverted from their original functions and frames of references into alternative contexts of meaning. 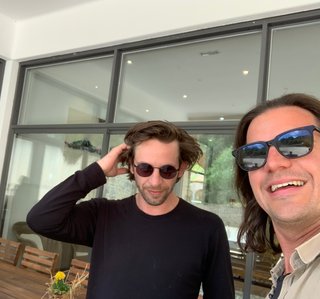 2019 Fly me to the moon. 50 Jahre Mondlandung – Kunsthaus Zürich, Switzerland