Within the Artist-in-Residence Program, CCA is delighted to host Julie Laenkholm.

Laenkholm was born in Copenhagen, Denmark, 1985. She currently lives and works in Copenhagen and she is staying in Studio Verde during December 2019.

The artist received her Master’s degree in Fine Arts from Parsons The New School for Design, New York, in 2015 with a full scholarship as the first Danish female. During her graduate years, she was a scholar at The Bikuben Foundation of New York; among various grants such as The New School Student Senate Grant, she also received the Kaare Klint Award in 2015 for her work with light.

She has exhibited at Tranen, Contemporary Art Center, Copenhagen, Denmark and Húsavík Museum, Húsavík, Iceland. She has participated in residencies and extended research trips to Sri Lanka, Lithuania and Iceland.

Julie Laenkholm works in various mediums and defines herself as a sculptor. Her practice unfolds itself in a ritualistic manner with a provisional approach to materials, and engages in a conversation with new materialism by exploring “the physicality of the in-between” in the dialectic relationship between the body and its surroundings. 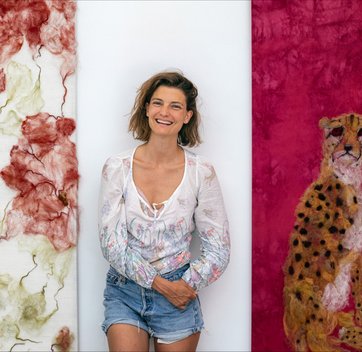 2018 The Unbearable Lightness of Being, Eighteen, Copenhagen, DK

Please note that CCA Andratx will be closed for holidays between December, 21st 2019 and January 27th, 2020. Book your visit by appointment here (info@ccandratx.com)